Master Gun Speaks – Episode 3 – All About the Mess 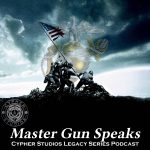 In this third incarnation of Cypher Studios’ Legacy series “Master Gun Speaks,” Master Gunnery Sergeant Samuel Davis, Jr., candidly shares the effects of the 1972 Equal Rights Amendment to the United States Constitution (which banned discrimination based on sex) had on him and his military career.
Highlights included in this episode are:

Executive Order 11478, prohibiting discrimination in the military and equal opportunity employment in the Federal Government
“Fock” me
The Generals Mess
Dreaming of Air Station El Toro
Cali or bust in a Volkswagen, hey it was the 70’s
Touring in Japan
The Trouble Shooter
WPT Hill Award for the Best Mess

If you or someone you know may be interested in hosting a podcast or have an idea for a podcast, pitch us your show idea at:
info@cypher-studios.com
DISCLAIMER: The views and opinions expressed in this podcast or comments posted referencing this podcast do not necessarily reflect the views and opinions held by Cypher Studios or its management.   Nothing in this podcast should be taken as a recommendation or endorsement of any kind for any product or viewpoint.